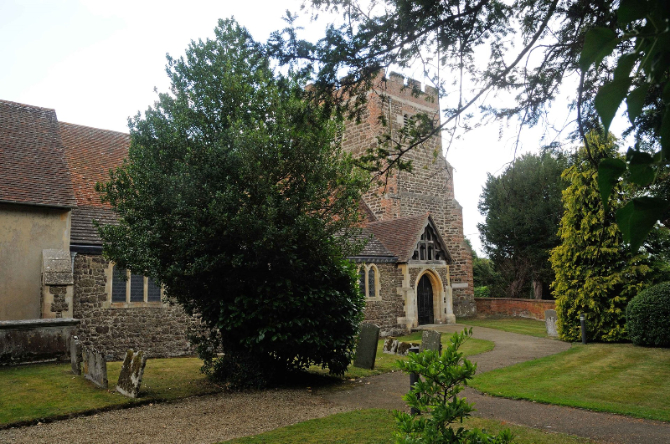 St Michael's is part of The Whitewater Benefice which includes the churches of Heckfield, Hook, Mattingley and Rotherwick.

For a small village, Heckfield has a very large church which shows that Heckfield was formerly a place of much greater size and importance.  In fact, a 16th century memorial in the church to John Cresswell refers to him as "Lord of the towne".

It is known that there has been a church on the present site since the 12th century and it is probable that a Saxon church stood here at an earlier date.  There have been two major restorations, both practically resulting rebuilding of the church.  The first of these was in the 14th century and the second during 1876 and 1877.

The church is approached through the churchyard, which was closed for burials in 1885: a modern addition if the Garden of Remembrance, which, lies to the right of the path.

The church is entered by the main North Door, close to the Tower, which apart from renovation in 1935, has stood as it is today since 1500.  The view from the top is magnificent and like other church towers, it has been a lookout post in times of danger from the days of the Armada to the days of Hitler - please note that the upper steps leading to the roof are very worn and any visitors should take the greatest care.  Five bells hang in the Tower - the earliest dated 1396 and the latest 1641 which, of course, indicates that there must have been some sort of belfry or tower before the existing one.

Immediately inside the church is the Font, which is dated 1350 and is made of Purbeck marble.  To the right is the west window, the stained glass centre of which is predominately of red and white roses, the emblems of the Houses of Lancaster and York.  This window was put up to mark the marriage of King Henry VII to Elizabeth of York in 1486.

On either side are several memorials.  On the left is one to Lieut-General the Hon. Sir Galbraith Lowry Cole, who was one of the Duke of Wellington's generals in the Peninsular War: He lived and died in Highfield Park, only a few miles from his old chief at Stratfield Saye. On the right is a memorial to William Milton, Vicar of the Parish for 51 years.  He was quite a handyman, designing a safety device to prevent the wheels of stage coaches falling off and he also had a hand in the planning of Bristol Docks.

William Milton's youngest daughter, Frances, was born in 1779 and raised in Heckfield. She eventually married a barrister Thomas Anthony Trollope, before becoming a noted writer. She had seven children, but only her oldest and youngest sons survived her. The oldest, Thomas Adolphus Trollope, was a celebrated literary man and her youngest, Anthony Trollope, became one of the greatest Victorian novelists.  See Frances Trollope for more information.

Moving to the North Aisle the first thing that meets the eye is a stained glass window attributed lo Thomas Kent.  It is unusual in that the background is light in colour, whereas Kent usually used dark backgrounds.  Finally, close to the North Door is a memorial to Neville Chamberlain, Prime Minister of Britain from 1937 to 1940.  Chamberlain spent his last few months at Highfield Park and died there at the end of 1940.

This brief history is based on the researches of the late W. J. James